I developed a passion for creating electronic instruments and effects in the late sixties.

My first such creation was constructed from an old keyboard ripped out of a relative’s unwanted piano. I made contacts from tinned copper wire and the square waves were made from printed circuit boards I etched myself, using a printing pad I made for the resist and concentrated nitric acid (for etching away the copper) which I somehow persuaded the local pharmacy to sell me. The circuit used a series of divide-down flip-flops made from low quality surplus-grade germanium transistors with a master oscillator for each note. It sounded truly dreadful but, as a schoolboy, I was so proud of my organ. I painted the wooden case orange and black. For some reason, which now escapes me, I decided to call it The Quilcom.

As my skills and knowledge developed I made several effects such as a wah-wah pedal, a phaser and a tape-based echo machine, another Quilcom and a modular synth, using Curtis chips, and a self-programmed microprocessor-based master keyboard. 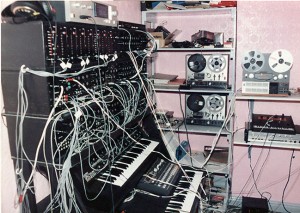 By this time commercial synths had improved so much and had become more affordable, so it didn’t seem worth the time, cost and work to make them anymore. So I bought a Yamaha DX7 and built my first bedroom studio based around the Sinclair Spectrum with an XRI Micon MIDI interface with sequencer software. After a few years I replaced the DX7 with the then new Roland D-50 but time pressures and a young family led me away from any electronic music projects.

Sometime later I got a PC and found that there were musical possibilities with these, very basic at first but still possibilities. Then real-time synthesisers eventually became a reality and led to the creation of some amazing plugins for the new breed of sequencers (DAWs).

I was frustrated that I simply didn’t have the time to learn coding, to once again return to making instruments and effects, even though I had ideas for stuff I’d like to make and try out.

Late in 2015 I discovered Flowstone. This wonderful application finally allowed me to make whatever Quilcom I wanted, this time using just a mouse and my PC, to experiment and create the plugins I visualised and wanted to hear. But I still favour orange and black!

The Quilcom range reflects my keen amateur efforts. This is hobby-grade stuff and is a tiny subsection of the fantastic range of what can be achieved by the Flowstone pros, many of whom make good money from their products. My hope is that you may be inspired by my output to investigate Flowstone (I’m not affiliated) and maybe buy a license thus keeping this rather niche product alive and developing. If you go to the Flowstone site you’ll see they are heavily into robotics too.

All the Quilcom VST instruments and effects have been tested in Reaper 32 bit and 64 bit on Windows 7, 32 bit and 64 bit respectively, on a Core i7 PC (Mac and Linux are not supported). This Quilcom area is for the exported plugins and sometimes stand-alone executable files only. Just click on the screenshot images to download the free plugins if something takes your fancy.

If you want the Flowstone FSM project files go the Flowstone forum (under SUPPORT) and search for Quilcom. You’ll find so much more there too, so please join and join in. My screen name is Spogg so if you join the forum you can contact me there rather than through this website.

I hope you find something you like here so… have fun!